Posted at 13:09h in Blog by Rachel Posner
Share

Abandoned buildings, deserted streets, and graffiti used as a political protest, Berlin is raw, vibrant and wonderfully eccentric. The graffiti mecca of the urban art world. For many, Berlin represents the democratic art movement around the world, an entire museum dedicated to the genre.

*Note all the real hard partying in Berlin happened before the 48 hours of inspiration. That’s an article for a different website

48 hours in Berlin started at Mauerpark, a rundown park where hip Berliners and tourists descend upon every Sunday.
A short rummage through the handcrafted treats, 60s vinyl records and bric-a-brac led through to the bustling park area. Thousands of people laid bare on a blistering hot day enjoying a continually evolving music festival with open-mic karaoke and a plethora of street performers.

Next stop, the East Side Gallery. The last remnants of the Berlin Wall now consist of an authentic selection of politically expressive murals by artists around the world. Millions of tourists visit the wall each year, the wall reflects peace and unity, however, the areas around the wall truly represent Berlin’s cultural views. 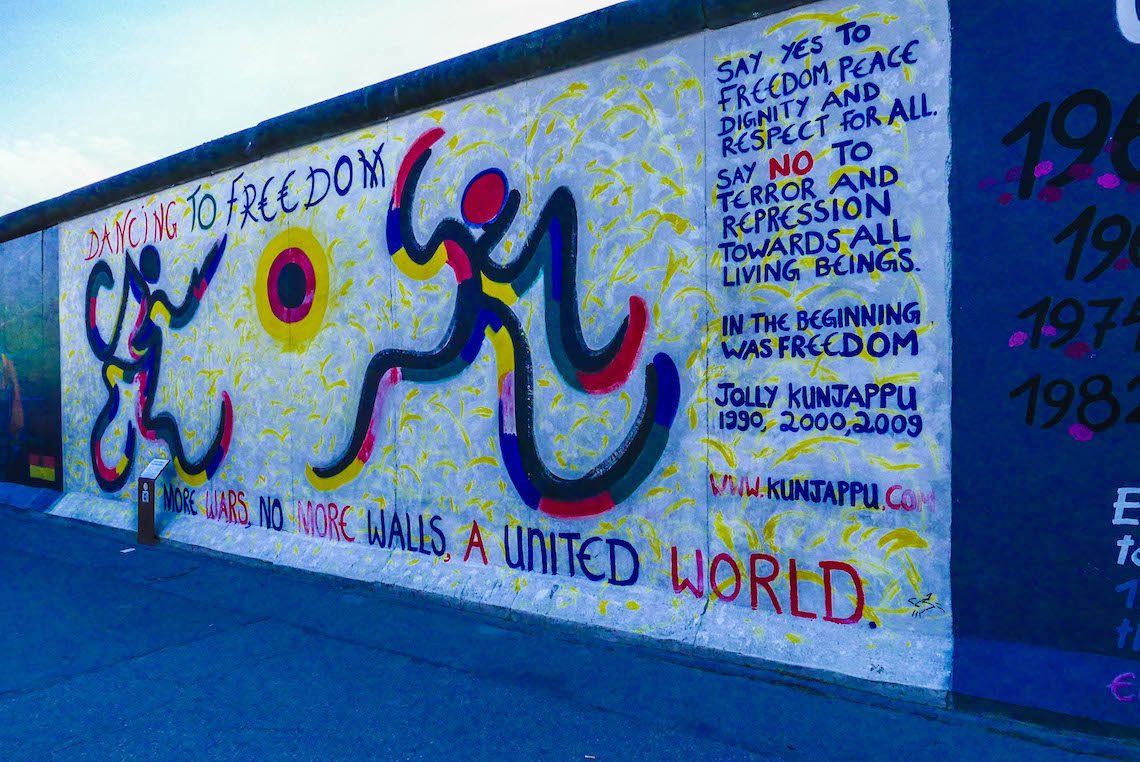 Hidden behind the East Side Gallery is YAAM (Young and African Arts Market), a hedonistic atmosphere that feels isolated from the city, but in the best way possible. Donations to YAAM keep this leisure centre alive, and it’s community feel highlights where Berlin stands today within its bohemian culture. Time stops inside YAAM; you get the impression some visitors never leave. Whether sipping a beer at the humanmade beach to dancing like no ones watching inside the concert room, it’s impossible not to immerse yourself in YAAM’s Jamaican and Caribbean culture.

A trip to Berlin’s ISM Hexadome exhibition at Martin Gropius Bau followed. An immersive audiovisual activation inside a Hexagonal projection arrangement. The stellar line up of artists performing inside the Hexadome included Brian Eno, Holly Herndon, and Thom Yorke of Radiohead.  Musicians and producers of the highest calibre suggested that this activation will be an unforgettable experience. Maybe we went on an off night. The dome-shaped visual sound array felt impressive, but the performance underwhelmed. One bloke was in complete despair before the show even concluded.

Before turning in for the night, we visited a cultural hub known as they Revaler Strasse in Friedrichshain. The ‘clubbing mile.’ The repurposed industrial buildings are something of a surreal adults playground filled with clubs, concert venues, bars and street art. At the head of the clubbing mile is Urban Spree, a new project curated by the French crew behind the infamous HBC nightclub. The area is complete with an art gallery, concert hall, studio spaces and Bunsmobile food truck, with an emphasis on the experimental and DIY. This fantastic, creative and wonderfully eccentric area only scratches the surface of Berlin’s underground movement.

Berlin is known for its experimentation and originality, and their concept stores are some of the most impressive in the world. The contents of each store are varied, but where they share common ground is how they reflect Berlin’s distinctly self-possessed standard of style. A couple of highlights included ECOALF. The lifestyle store has wall to wall projections that create a calming environment for their staff and patrons. The visuals symbolise a more powerful message about the state of our oceans. The Ecoalf Foundation ambitious mission is to upcycle the oceans to bring an end to the rubbish epidemic that is causing devastation in our seas. ECOALF is a brand that uses the highest quality recycled fabrics to create a new generation of sustainable products.

The concept store x Soho House is a mixture of art, high fashion, and curated lifestyle products. The ‘Fly Paper’ exhibition by artist Kahil Joseph took place at one of Soho House’s unusual art spaces. The stairway down to the gallery space led to a mysteriously dark room where sound bellowed out of the speakers inside the installation. Joseph’s dreamlike Fly Paper exhibition takes you through a collage of Harlem’s past and present. Shaped by their dynamic community of black artists, writers, and musicians who call Harlem their home. The images come together through the creators personal narrative. The visuals intertwined with sonic soundscapes that travel through the room to create a unique acoustic environment.

Berlin’s courtyards make up some of the most intriguing sites of the city; they also represent a dark past of the town. Courtyards were purpose-built to separate the social classes. Now they reflect the shift in the city’s diversity and no more so than Schwarzenberg House. Hidden in the heart of Mitte neighbourhood lies Hackescher Market. The last holdout in the heavily gentrified area around the Hackescher Market.

Run by a nonprofit organisation, it’s an unpretentious space where art and creativity are allowed to flourish. Festooned with street art and bizarre sculptures dotted around the courtyards lead to an edgy cocktail bar, art house cinema, and exhibits that deal with Jewish persecution during WWII.

On our last night, we meandered through the streets aimlessly like two lost puppies finding any nook or crannies we can take an ounce of inspiration back to the UK. It turns out the inspiration came much closer to home. Dotted around the city, you’ll find a string of working vintage analog photo booths. These industrial booths, known as Photoautomats have become a symbol of the city’s youthful vibrancy. The Photoautomat project started in 2004 when a tech team lovingly restored photo booths from the fifties and sixties. The retro Photoautomat booths located on every street corner, including Checkpoint Charlie. For the curious history buff, Checkpoint Charlie was the crossing between East Berlin and West Berlin during the Cold War.

The purpose-built photo booths are rugged, and in a way, they have to be. They never close. Into the small hours of the night, Berlin’s partygoers can experience the fun and nostalgia of a Photo booth. An authentic, old school black and white photo strip produced for just 2 euros, the perfect souvenir. Except when you miss the first photo because you didn’t read the instructions.

Looking for a photo booth similar to the Photoautomat, get in touch today, we may have just the thing.

GET AN INSTANT QUOTE